You are at:Home»Events»Homecoming: 2016 St. Pat’s For All Parade

Once again, the Sandicam captured our day perfectly!

“Where are you guys from?” a father supervising a group of small children feeding Samson an endless stream of carrots asked the top-hatted crew surrounding the carriage in Sunnyside.

Carriage owner Stephen Malone pointed up to the intersection of 43rd and Skillman Ave. “I’m from right there. Grew up at 4308 til we moved two blocks up the street.”

The St. Pat’s For All Parade feels like a small town parade with a big mission – to take the phrase from the Proclamation of the Irish Republic, Easter 1916, “cherishing all the children of the nation equally” and making it a reality.

Congratulations to parade organizer Brendan Fay, whose organization “Lavender and Green Alliance” will finally be allowed to march in the St. Patrick’s Day Parade on Manhattan’s Fifth Avenue on March 17.

While this victory for equal rights for all closes a 17 year chapter on the era of the St. Pat’s For All Parade’s political protest, the joy that fills Skillman Avenue in celebrating everyone, Irish or wannabe, is a lasting testament to Brendan’s vision. We were honored to be a part of it for the second straight year this year, on Sunday, March 6, 2016. This year’s parade was a chance for us to celebrate our victory in the City Council in defeating Int. 573 (again). And happily we had much better weather than last year!

Going to a parade with a horse and carriage is no small task. Carriage, horse and harness have to be cleaned. All the parts and pieces have to be remembered and packed – flowers, carriage bolts, plumes, banner. And it all has to be loaded onto the truck and trailer. A big thank you to Marcy Brennan from Bronx Equestrian Center for helping us transport the star of the show, Samson, to Queens.

Getting ready for showtime also included Conor, Sean, Paul and Bernadette meeting our friends who represent Queens in government. Sean and Paul live in the neighborhood in Woodside, and in addition to our political friends to meet and greet there were many neighbors on hand to show their support. 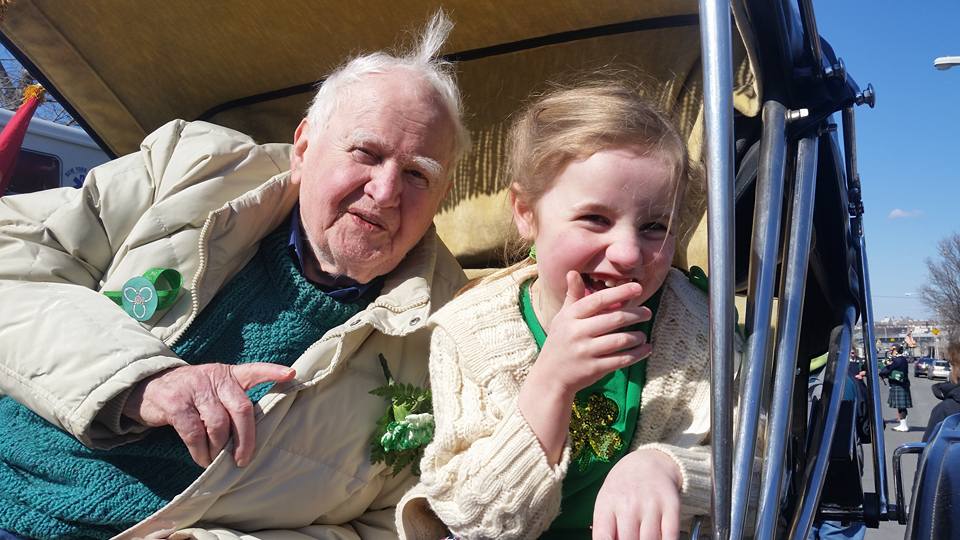 Malachy McCourt wanted to ride in the carriage for the parade, and we were more than happy to oblige.

(A bit of carriage and Malachy trivia intersecting: Malachy McCourt used to run a bar on Third Ave, Malachy’s, where he was often joined by actor Richard Harris, who would sometimes bartend. Richard Harris, of course, was a famous carriage afficionado, too, often bringing a book or champagne or any good excuse to the Plaza for a ride in Central Park.) 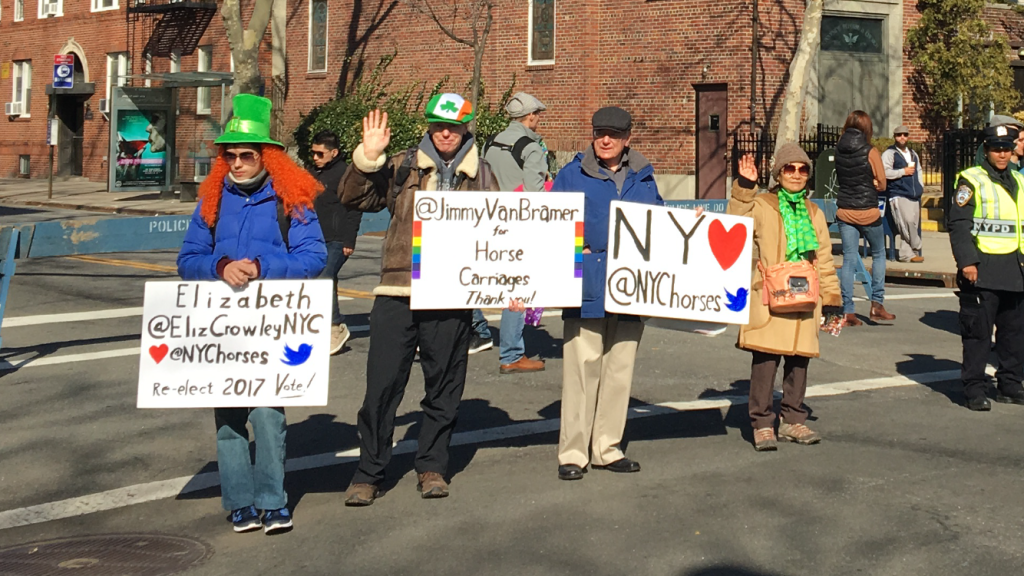 There is plenty of media coverage of the parade, and a couple of articles have pictures of Samson and the carriage. But there were no gaggles of reporters asking us about the created controversy surrounding the carriage industry, despite the Mayor being in attendance. All along the parade route we were welcomed and appreciated by our fellow New Yorkers. There were no questions, no protests against us, no petitions to bar our participation.

For once it was nice not to be newsworthy, and instead to be simply worthy …and at home. 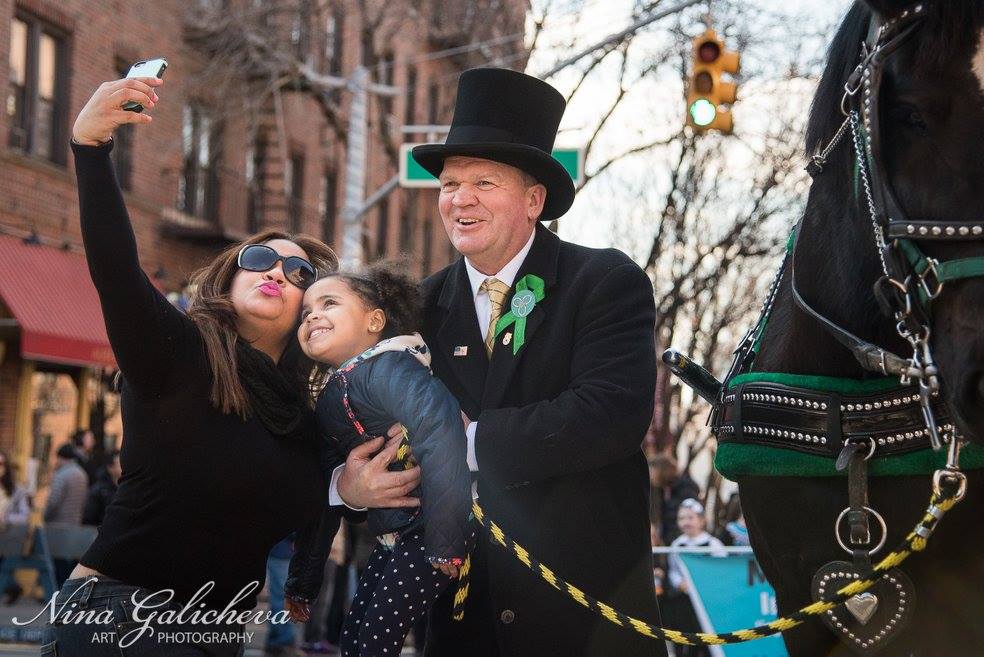 Selfie on Skillman Ave. with Paul

So many children and adults smiled and cheered as we passed. Not a one asked where @nyclass‘s car was #Carriageon pic.twitter.com/rkkic9yJRc

Check out more photos from the 2016 St. Pat’s For All parade from Nina Galicheva in the gallery below. Prints can be ordered from www.ninagalicheva.com.

Samson, the star of the parade

Let the parade of carrots begin

Conor with the shafts, hooking Samson up.

Stopped along the parade route

Samson consider’s the St. Pat’s For All Parade to be the “Carrots for Me Parade.”

Samson met many, many children at the parade.

Bernadette Kelly from the Teamsters

Christina and Conor pushing the carriage back on the trailer

Listening to the politicians on the dais, and getting a thumbs up from Tish James

The Kellys and Malachy McCourt

Kids of all ages love a carriage ride.

Carriage driver Mufiide is from Turkey but like everyone is Irish for St. Patrick’s Day

Selfie on Skillman Ave. with Paul

Samson is a magnet for everyone who loves a horse

The walk back to the trailer

Shadows on the pavement

Steve and a very small Yorkie, who has taken carriage rides in Central Park before

Waving to the crowd