(Read about the NYCCLC’s endorsement of the carriage industry here.)

We, the undersigned, members of the New York City Central Labor Council, AFL-CIL (NYCCLC), representing over 300 union affiliates and 1.3 million workers, urge you to express your support and solidarity for the NYC horse carriage workers, by standing up to preserve this iconic and thriving industry. The three hundred union workers of the New York City horse carriage drivers, who are members of Teamsters Joint Council 16 and Teamsters Local 553, stand to lose their livelihoods in the face of powerful, wealthy interests.

In 2010, the New York City Council worked with the Teamsters and the horse carriage industry to implement significant and meaningful reforms regarding the rates drivers can charge and animal welfare regulations. Those reforms greatly improved the workers’ standard of living and memorialized the best practices for working with horses, who are treated with great love and respect by their drivers and owners. Horses are housed in spacious stables complete with automatic waterers, and exhaust and circulation fans. Each horse is treated with dignity and respect, receiving breaks during the work day, and exceptional medical care and benefits.

We firmly believe that banning the horse carriage industry would be detrimental to New York City on a number of levels. Hundreds of working families would suddenly find themselves without income, a precarious situation for anyone in today’s economy. New York City stands to lose out on revenue generated by tourists, which helps to defray the cost of supporting city services.

We acknowledge that opponents of these workers include powerful, well-funded voices. We ask you to weigh the merits of this issue by examining for yourself the facts of this industry, and to keep in mind that your decision will impact the lives of many New York families. 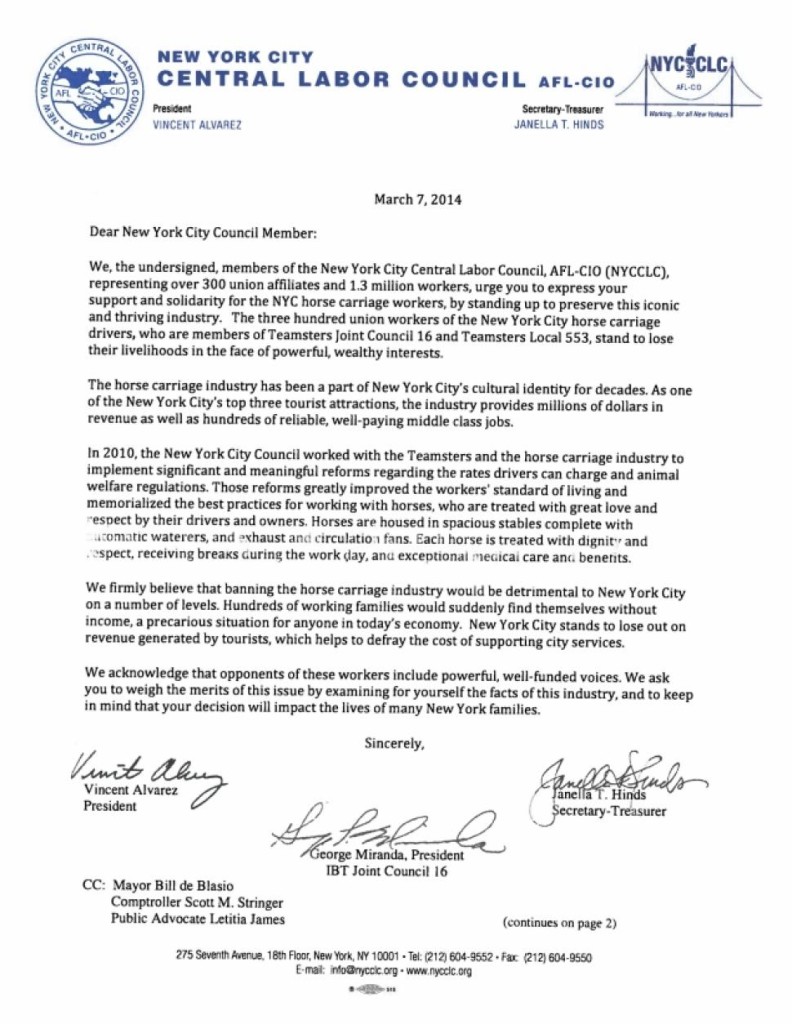