You are at:Home»Controversy»Fact Checks»Carriage horse trips, is uninjured – NYCLASS trips over truth in rush to judgment

Carriage driver Chris Emanus shows Max off at Clinton Park Stables on Monday, February 27, 2017. Max was uninjured after he tripped and fell in Central Park on Tuesday, February 21, 2017.

CARRIAGE HORSE TRIPS AND IS UNINJURED; NYCLASS TRIPS OVER THE TRUTH IN THEIR RUSH TO JUDGMENT

If only children in New York City got as much oversight and attention as carriage horses: a little tumble that didn’t even leave a scraped knee led to a conscientious carriage driver, several bystanders in the park, four NYPD Mounted Unit officers, two city agencies (DCA and DOH) and a licensed vet rushing to check on Max the carriage horse to make sure he was OK last week. Everything checked out fine, but that didn’t stop a discredited animal rights group, NYCLASS, from trying to get their name in the papers once more.
Carriage horse Max, who tripped and fell by Tavern on the Green last Tuesday morning, was back at the park today, having been cleared for work by the city health department.
Max was just back from his city-mandated country vacation last week when he tripped and fell in Central Park. Photos taken by an unidentified bystander show him lying on his chest with his legs curled under him. His driver, Chris Emanus, a veteran carriage driver with 20 years experience, quickly assessed the situation and determined that the harness needed to be undone so that Max could get his legs out from under him in order to stand up. A second photo shows Emanus pushing the carriage back away from Max so the horse has room to get up. Max had to roll to his side to straighten his legs and get them positioned properly to roll back on his chest and stand up.
Another bystander had called 911, and an NYPD Mounted Unit officer arrived on scene almost immediately. He inspected Max and could find no obvious injury. At that time, the officer also watched video provided by the bystander that showed Emanus unhitching Max and helping him up. She told the officer that she did not witness the horse “collapse.” Emanus got permission from the Mounted Unit officer to hitch Max back to the carriage and proceed home to Clinton Park Stable to have the horse checked out. Emanus was approached en route by two more mounted officers responding to the incident, who also saw the horse was sound and moving well, as if nothing had happened. Emanus returned to the stable on West 52nd St. where he was met by an NYPD Mounted Unit supervisor, who called the vet to come examine Max. Dr. Dennis Farrell examined Max and likewise did not find any evidence of distress or injury.
Out of an abundance of caution and concern for the horse’s welfare, Dr. Farrell drew blood and advised that Max not return to work until the test results came back normal. Those results were all normal, and Max returned to work with Chris Emanus at Central Park today. Emanus and Max were available at the park and at Clinton Park Stables tonight to show that Max is well.

Carriage horse industry spokesperson Christina Hansen says that Emanus informed her that Max had tripped the day after the incident. “All of the procedures that a driver should do in this situation were followed, out of care and concern for the horse. Chris followed everything to the letter, and should be commended for his professionalism and care for the horse. The NYPD and DOH investigated and found that Max is absolutely fine.”

Hansen also notes that the photos being circulated by NYCLASS can be taken out of context to upset viewers who might not realize that Max is OK. “I find it interesting that NYCLASS appears not to be releasing the video that the bystander showed the NYPD, or is otherwise ignoring that Max quickly got to his feet once he was unhitched. They’ve taken the moment Max rolled to his side and frozen it in a still picture as if that were the whole story. It’s not. The story is that a horse tripped, fell, was helped by his driver, examined by NYPD and a vet, and found to be fine.” 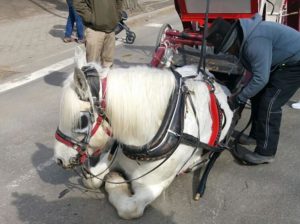 Max the carriage horse being helped by his driver, Chris Emanus. Max had recently gotten new shoes, and tripped and fell. As you can be seen here, the shafts and harness are preventing Max from getting his front legs out in front of him and throwing his head and neck forward to stand up. So Chris is helping Max by undoing his harness. 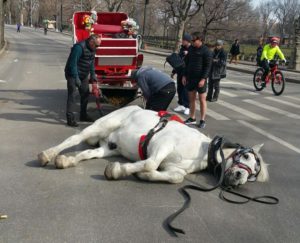 In the next picture, the carriage driver, Chris, and a bystander are rolling the carriage back from Max. In that moment, Max has rolled to his side to stretch out his legs and get them in better position to stand up. Immediately after this still frame was shot (or chosen), Max rolled back onto his chest, extended his front legs and stood up. Funny how NYCLASS did not provide those images to the public, which would show that Max was fine and easily able to get up moments after this picture was taken.

NYCLASS, in a bid to get headlines again after their proposed carriage ban has been abandoned by City Council, is calling for an “independent investigation” of Max’s trip and fall that resulted in no injury.

“That’s absurd,” says Hansen. “There’s already been an independent investigation by the city. The NYPD Mounted Unit – equine experts and law enforcement – working with a licensed vet and the DOH have corroborated that the horse tripped, fell and was unhurt. They cleared Max for work as healthy and fit. Further, an abundance of outside equine veterinarians, horse advocacy groups, and media outlets have all independently investigated the carriage industry over the past several years and found it to be safe, humane and well-regulated, in exact contrast to NYCLASS’s many false allegations.”

This video below from Blue Star Equiculture shows a large draft horse rolling and getting up in slow motion. Notice how a horse must throw his legs out in front of him and use his head and neck to help propel his body up from the ground, even from a sideways position.